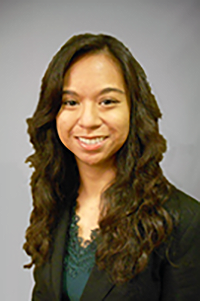 Bernadette E. Valdellon is the firm’s associate attorney. She is admitted to practice in all state courts in California and all courts of general jurisdiction in the District of Columbia. She received her B.A. in French from the University of California, Berkeley in 2007 and her J.D. from Santa Clara University School of Law in 2013.

After working on human and civil rights law issues in her school’s international human rights clinic and completing legal internships at the Extraordinary Chambers in the Courts of Cambodia and the United Nations Educational, Scientific and Cultural Organization, Bernadette worked in the Middle East with military contingents from different countries to monitor peace treaty compliance. She most recently managed a national pro bono program providing representation to veterans seeking disability benefits for mental conditions related to military sexual trauma. Bernadette speaks French and basic Tagalog.